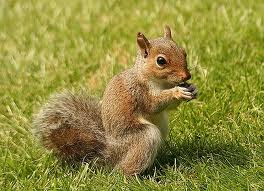 5. The Squirrel
Ball Digger started the car and began the twelve-metre journey his Sat Nav was telling him he needed to go to reach his desired destination. The whole of the journey was filled with a deadly tension. There always seemed to be tension when Hyde was in company, but this time it felt deadly. Hyde was clearly angry that the trousers would not fit him. Ball Digger could hear him muttering something or other under his breath about his being cursed with a fast metabolism. Hyde was not a 34 waist, and no matter how many hot dogs he slid down his throat he could never catch up with the other fat American cops on the force. He had at times become the subject of ridicule for it, and looking at this pair of unfilled trousers only bought the haunting memories flooding back.
“We’re here” said Ball Digger as he slowed down the car moments after starting it up. The pair looked out in silence. There was no sign of a man on the floor, or a man who had once fallen, nor any sign of a man walking away after a fall, there was one sign and that sign said “Road Works Ahead” Hyde got out the car, “let me investigate” he said and slammed the car door shut. In one of his rare outbursts, or at least an outburst by Ball Digger standards he shouted back “Watch the Mazda!” Hyde looked around a bit, and then bent down and looked under the car. After thoroughly inspecting the space under the car he pulled himself back up to the window. “I don’t think there is anyone here”.
“No I was coming to that conclusion myself,” Ball Digger said nodding in solid agreement.
“Look there!” Gasped Ball Digger suddenly. “A squirrel!” Ball Digger could not resist a squirrel.  “And look he has a nut awww”
“Hang on a minute!” said Hyde in a rare state of excitement; he rapidly shuffled through the pockets in all his clothes, which were five as he had forgotten to count the two on the back of his jeans. Eventually he yanked something out his jacket pocket. “I have some hazelnuts!” Hyde couldn’t resist a hazelnut. He ran like a child to within feet of the squirrel and placed the half eaten bag of nuts on the ground and ran back (again like a child).
“At least we can’t say this mission was a total waste of time,” said Hyde getting back in the car.
“You know it’s funny though” Said Ball Digger “ The man just disappeared without a trace” He turned to Hyde who had now fashioned his own turban out of the aloof trousers.
“I don’t think that’s very respectful” It was clear to Ball Digger the bonding that had happened over the squirrel was over. Hyde was back and overcompensating in his cruelty in fear of having shown a soft side. “We all shit you know” Ball Digger wasn’t sure why he said this, but he did.
“Fuck you Ball Digger,” said Hyde.” I’m thirsty, look there’s a Hooters let’s get a drink”
“But it’s only half past two”
“They do lattes”
(To be continued)
Posted by Babak Ganjei at 17:50