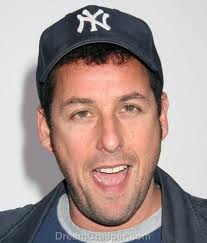 The Window Cleaner
Adam Sandler plays David Sprockett a window cleaner with a difference. He has a fear of the outdoors, so he only cleans the inside windows. He strikes a bond with one of his clients Belinda (Eva Mendes) while cleaning in her flat. With her help he learns to embrace the streets. Soon he finds himself making double the money as he can now clean both sides of the windows. With his newfound wealth he dumps Belinda only to realise the error of his ways when he locks himself out his house.
Fill Her UP
Adam Sandler plays Louis Dilbert a simple Gas Pump Attendant who dreams of becoming a Petrol Station Manager. His life plans are turned upside down when he falls in love with a girl who has one of those electric cars (Drew Barrymore). Suddenly Louis has to ask himself the big question…”Is there more to life than petrol?”
The Graduate
Adam Sandler remakes the Graduate, and does it in one of his trademark funny voices. Co-starring Honour Blackman.
No Pleasing Pleasin
Adam Sandler plays Frank Girdle, a nice guy who gets stuck in a lift with a girl called Pleasin. And there’s no pleasing Pleasin.
Another Mans Shoes
Adam Sandler plays Bobby Bickford a sports journalist who wakes up after a party in another mans shoes. As he tries to retrace his steps he comes across a kind substitute teacher Jane Druidzky (Michelle Pfieffer). But is she the wife of the man whose shoes he is wearing? And where are his shoes? And why would there have been a situation in which this mix up could happen?
Let’s Not Talk About It
Larry Larry(Adam Sandler) has an incredible fear of Skateboards. On top of this he can read the thoughts of woman. One day he falls in love with a pianist, his fear of skateboards will never really come up until roughly seven years into their relationship when she greets it with mild bemusement. Because he can read her mind he is relieved she really doesn’t care about this in the slightest. In the Romantic Comedy critics are labelling” mildly pointless”.
I’m In Love With Your Shadow
Shandy McShane is a social misfit; he can’t bring himself to talk to anyone, and longs to live in another time. The time of silent films. His obsessions with his heroes Buster Keaton and Charlie Chaplin begin to border on the uncontrollable as he loses himself in a world of mime and theatrical performance. To complicate things further he falls passionately in love with the shadow of an undercover cop… and she’s never standing still!
Bad Timing
At the funeral of his wife Chuck Jewder (Adam Sandler) finds himself falling madly in love with a long lost friend of his wife Sally Bloom (Jennifer Anniston). Only it turns out Sally is at the wrong Funeral, and never even knew his wife. Chucks friends try and point out that the fact she wasn’t his wife’s friend doesn’t make it fair game, at least not on Funeral day. But hey in the words of Chuck “when the heart speaks it also sticks it’s fingers in its ears and opens its mouth and goes ahhhhhhhhh”
The Really Happy Guy
Bradley Bixley (Adam Sandler) is a really happy guy, the kind of guy who plays the lottery every week and has never won a cent but says,”It’s not about the winning it’s all about the taking part”. One day he falls in love with Raquel form work (Lindsey Lohan) and slowly his life turns to hell.
I’ll Meet Me In Ten Minutes
In this Hilarious period drama Buxton Conroy (Adam Sandler) plays the first guy to get a mobile phone in the late 1980s. As he desperately tries to rearrange set plans he made with his girlfriend from the week before he realises he is the only person on the other line. The phone breaks them apart, as he no longer can stick to a planned arrangement. Until ten years later when he calls a wrong number and it’s her on the line. Can the thing that broke them apart bring them back together?
Posted by Babak Ganjei at 11:39